Well, we are finally on the plane to Florida after the harrowing journey of part I. ’75 has been drugged with Dramamine and is out like a light, ’80 has hit the sugar crash and burn wall so she is also asleep, ’79 still has cups over her ears convinced they will help if she just keeps them on. I sat us in the center aisle back near the tail section so we wouldn’t bother as many people. Everything is quiet and it seems like it may be a easy flight, and then….. turbulence, very bad turbulence. That plane felt like one of those old wooden roller coasters, which I normally love but not at 20,000 ft. Needless to say ’75 woke up and started throwing up again, ’79 is terrified and will probably be traumatized for life, ’80 is still sleeping. “What!” how could she possible sleep through this, it’s a gift ladies and gentlemen, ’80 can fall asleep under any circumstances and in any position, including standing on her head. The last hour of our flight was like this, we were all a little green by the time we landed.

Once we were safely on the ground we had a 3 hour layover before moving on to Guadalupe. We would be leaving the country for the first time and I couldn’t help being excited by the prospect of a beautiful island paradise. Our flight was called and we prepared to board, but I was not prepared for this. 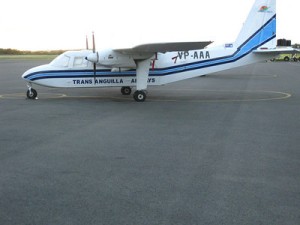 Where was the plane! You know, the plane. the. big. safe. plane. I wanted that one, not this toy version. My husband is reminding me it is only a 45 minute flight how bad could it be. I am not allowed to repeat what I said to him. We stepped into the plane which had a stewardess who didn’t do much except look grumpy and non responsive to questions. By now all the kids are asleep and the flight should be uneventful right. Once we had gained altitude I looked back down the aisle and saw what appeared to be smoke inside the plane. I calmly called the stewardess and pointed it out to her. She said ” Oh yes, nothing to worry about, it is just condensation. It does it all the time.” Then she walked away as though it were nothing. I think I must have set a world record for holding my breath while praying during that flight.

We arrived in Guadalupe which is near Venezuela and walked into a wall of humidity so bad we could hardly breathe. The ride to the resort was an eye opening experience. The resort was rustic and lovely but the trip there showed us some of the most impoverished people I had ever seen. Club Med is a licensed French registered company and most of its employees speak only french. This made for some interesting days as my husband speaks a little German and we met a couple who spoke German and french, so dinner conversations were a hoot with all the translations. Club Med is a good idea for families. You have breakfast together and then they go to the kid camp where they are pampered and entertained for the day. They have their own pool and crafts and games. The older kids learn to scuba dive and archery and other things. This leaves you time to do things with your husband, unless of course he scuba dives every day but you can’t because you didn’t get certified, then you are on your own. There is plenty to do though and at the end of the day you pick up your kids and have dinner together and then go watch a live show before going to bed. There was a lot of food not all of it recognizable but it was good, even the brown or tan or orange soup we had every night at dinner. We didn’t know what it was, only the color and that it was pureed. We had a good time and there were too many moments for me to write them all so I will just highlight a few.

I saw my little girls going to the beach one morning. Marching in line behind their supervisor like little ducklings following the momma duck. “How cute I thought” and then I noticed they had stopped and their eyes were the size of saucers. ’79’s arm came up and she was pointing at something so I looked to where she was pointing. No! No! No! I started to run towards her hoping to stop what I knew would come out of her mouth. I was too slow. “MOM. MOM. THAT WOMAN’S NAKED! EVERYONE CAN SEE HER BOOBIES” Heads turned, necks swiveled, and all towards us. When I reached her I explained that “yes, the lady has no top on because in this country that is allowed. It really is no big deal” I said. She looked at me with all of her four year old innocence and said “are you gonna take yours off”. ‘Well, not today” I said. Our last day there was also Bastille day which is a big french holiday like our fourth of July. There were parades and games and bar-b-ques.  There was a talent show where ’79 sang Like a Virgin by Madonna, I hate that song, she came in second. We were tired and tanned and ready to come home.

Guess what! except for a little bump in customs when ’79 and ’80 insisted that customs check their toy glow worms for possible bombs, everything was fine. Can you imagine the uproar that would cause today. Lord knows we deserved an easy trip home, huh. Hope you enjoyed this story. You should know that since this trip in 1983 there has been a revolution and 2 devastating hurricanes in Guadalupe. They started rebuilding in 2005 and it has become a tourist hot spot which has improved the economy for the local people.