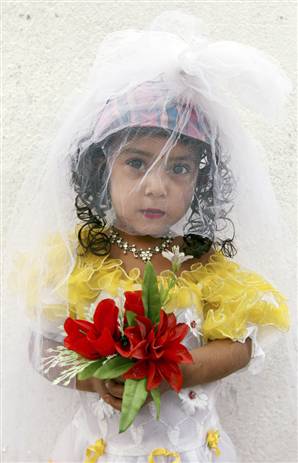 Words fail me when we live in a world where this is not a crime. The Saudi judge Sheikh Habib Al-Habib denied the 8 year old’s petition for the second time, first a divorce and then an annulment. He did make one concession, that the 47 year old husband sign a document that he would not consummate the marriage until she reached puberty. Let’s see…girls reach puberty around 10 to 12 years of age…so he has 2 years to intimidate her into submission. SheikhAbdul Aziz Al-Sheikh, the kingdom’s grand mufti, said “It is incorrect to say that it’s not permitted to marry off girls who are 15 and younger, a girl aged 10 or 12 can be married. Those who think she’s too young are wrong and they are being unfair to her.” Al-Sheikh reportedly made the remarks when he was asked during a lecture about parents forcing their underage daughters to marry.”We hear a lot in the media about the marriage of underage girls,” he said, according to the newspaper. “We should know that Sharia law has not brought injustice to women.”

I know your asking what about the parents, where are they. Her Mother is the one filing the petitions and trying to save her daughter. Her Father is the one who married his 8 year old daughter to his friend to pay off the debts he owed him. I am sitting here trying to type and tell this story impersonally reporting the facts, but it turns my stomach and I can’t be impersonal. She is 8 years old, just a baby and yet one of the leaders of her country says that she is not too young and we are being unfair to her by thinking so. If she were here in America she would be in 3rd grade, she would like barbies and Twinkies, she would be having ballet lesson’s and playing AYSO soccer . Boy’s would still be yucky (except her dad and the Jonas brothers). Most of all she wouldn’t be thinking about sex and being married to a 47 year old pedophile that her own father sold her to. It breaks my heart to think of that Mother trying to explain to her daughter what has happened and why she has to go away with this stranger who probably won’t ever let her see her Mother again. What does this say about the values, the morals, of this father and his friend. Call it what you want but I call it rape and pedophilia being condoned by a government which uses their religion to protect it. I never realized just how far apart our cultures were… until now. I refuse to believe any  religious deity, God … Muhammad … Buddha …Yahwe’….Zeus…whatever religion you believe in would approve the harming of a child. 8 year old girls  do not want to be wives for real and anyone who thinks so is twisted. “WHAT WERE THEY THINKING”.

To view the whole sordid story go to