Have You Seen Victoria Stafford… 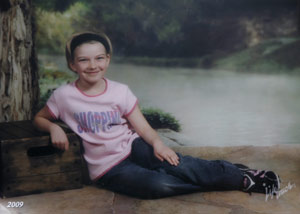 TWO PEOPLE HAVE BEEN ARRESTED AND CHARGED WITH 1ST DEGREE MURDER AND KIDNAPPING. TORI IS NOW TRAGICALLY BELIEVED TO BE DEAD AND THEY ARE CONTINUING THE SEARCH FOR HER BODY. YOU CAN READ MORE ABOUT THIS AT VANCOUVERSUN.COM

Fellow bloggers lets help find Tori and bring her home, post this story and get the word out to as many readers as we can…R

A day later, police released security video taken from a high school up the street from Stafford’s elementary school. Though the quality is poor, it shows what investigators have since confirmed is the missing child walking with a woman of interest on Fyfe Avenue.  The video was shot at about 3:32pm Wednesday  April 8, 2009 and it’s the last known sighting of Stafford.

She was last seen wearing a black Hannah Montana jacket with a white fur-lined hood, a black velvet skirt, black and white shoes and a purple and pink Bratz bag.

Anyone with information is asked to call police at (519) 537-2323 or Crime Stoppers at 1-800-222-TIPS (8477), to remain anonymous. There is a reward for anyone who has information that leads to the safe recovery of Victoria (tori) Stafford.

For more information please got to the original post at helpfindmychild.net

3 Responses to Have You Seen Victoria Stafford…