Daddy To The Rescue….

Well I have a story about my husband and it is a new one because it is happening now as I write this post. My son ’88 is a dj and he had a gig that was 2 hours away. Shortly after getting there he felt ill and decided to come home. He was unfamiliar with the area and quickly became lost. Turned out he was going the wrong way and was even further away from home. This would have been only a small problem except he didn’t have much gas. He had used his last $20 to put gas in the car earlier and because he didn’t play at the gig he did not get paid. We quickly figure out the quickest and shortest route for him to use and felt he might just have enough gas to make it. Again being unfamiliar with the area he went north instead of south at the exchange and was lost again. When he got too low on gas he pulled over at the next Denny’s and called us collect because his cell phone was dead. Boy when it goes wrong, it goes wrong. His Dad has gotten up out of bed and is getting dressed to go get him and buy him some gas so he can come home. He is over an hour away and it is 3:00 am. Now that’s a Daddy.

To ’73 the best Dad ever. We are buying you the biggest platter of Lucille’s ribs they have, because you deserve every one,…….. HAPPY FATHER’S DAY. 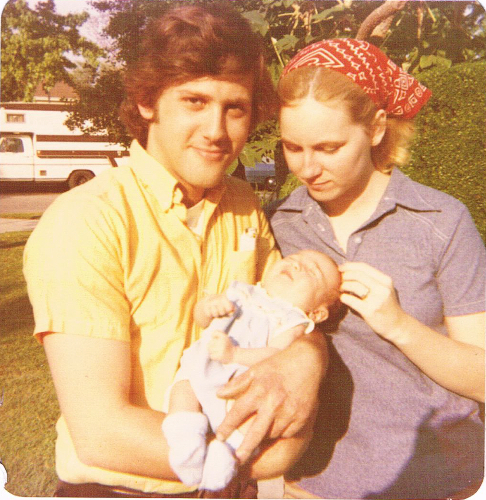 ’73 with our first baby. The proud new Father. Only 3 more kids to go. Could we be any younger….

8 Responses to Daddy To The Rescue….