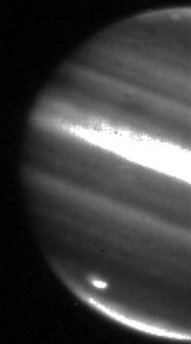 This image shows a large impact shown on the bottom left on Jupiter’s south polar region captured on July 20, 2009, by NASA’s Infrared Telescope Facility in Mauna Kea, Hawaii. A large comet or asteroid has slammed into the  planet Jupiter, creating an impact site the size of Earth, pictures by an Australian amateur astronomer. Computer programmer Anthony Wesley said it took him 30 minutes to realize a dark spot rotating in Jupiter’s clouds on July 19 was actually the first impact seen by astronomers since a comet collided with the giant planet in July 1994. REUTERS/NASA/JPL/Infrared Telescope Facility/Handout

Well, this gives you a new perspective on your importance in the universe. That little dot at the bottom of Jupiter is a crater the size of Earth. Compare the two, go ahead I’ll wait………mind boggling isn’t it.

“There are more things in heaven and earth, Horatio, than are dreamt of in your philosophy”…. Hamlet Act 1, Scene 5