You have heard me talk about my dog Jack before so you know he is one strange mutt. He recently had to have a cyst removed from his back and has to wear a cone until the stitches are healed. Any of you who have been through this with your own dog knows how funny it can be. He bangs into everything, nothing is safe so I have to dog proof the breakables. We have another dog, MacGyver and together they are like an old married couple. When Jack went for his surgery MacGyver cried and howled and generally moped all day. Well MacGyver has had enough with the cone. He is tired of getting hit by this thing and I don’t think he is getting much sleep because of getting whacked during the night, so he is cranky. I can’t separate them because neither of them will stand for it so what’s a dog mom to do. It will be another week before this cone comes off and I am hoping tempers do not flair. High heat *105 and getting smacked in the face by your partner, not a good combination. The cyst really scared me, it was big and not noticeable the day before. It grew to the size of a nickle in 24 hrs. Everything is ok now but it was hard. No more days like that for awhile I hope. 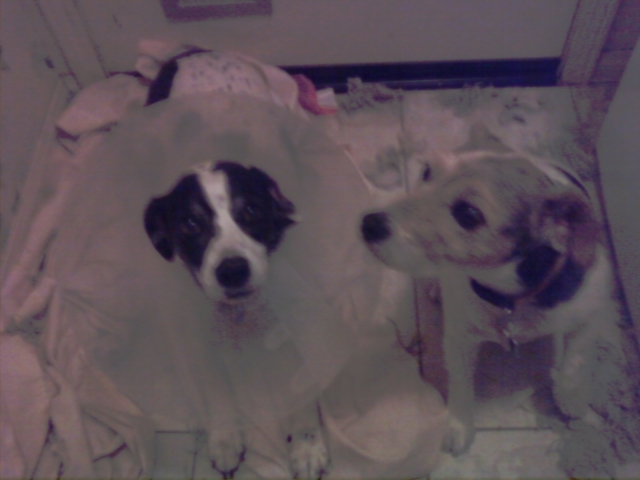 You might be wondering where they got their names. Well we thought Jack would be very fast so we called him Jackflash. As it often happens in life we were wrong, he is not fast but he is smart, sometimes too smart. The first day we had MacGyver he got his head stuck inside a McDonalds bag. We laughed until we cried, he just couldn’t get it off  so his name was to be Mac after the Big Mac. But after realizing Mac and Jack were confusing the dogs because of sounding too much alike we changed it to MacGyver. We had already registered him with the AKC kennel club by the time we changed it so legally he is Little Man Mac Attack. I always thought they sounded like a rock band ” Jackflash and Little Man Mac Attack”. Notice the rags on the laundry room floor, that’s their blanket or what’s left of it. They have a good time chewing it up and then bunch the pieces together to sleep on, it’s pathetic. They are 11 and 12 now so they are elderly old men and not likely to change their bad habits but I wouldn’t have them any other way. I intend to cherish these last few years together. They are about due a new blanket so maybe if they can make nice for just one more week I’ll get them a reward.