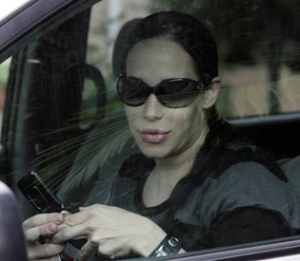 What is it with this country that we can judge people so harshly, simply because they showed a lack of good judgement and behaved irresponsibly. Nadya Suleman has committed no crime, nor has she broken any laws, yet the media has portrayed her as a con artist, as someone with a hidden agenda and questionable sanity. From the moment they found out about the multiple birth of 8 babies by implantation and that the Mom already had 6 more kids at home, and she was receiving government assistance, the media has bombarded us with the idea that she is personally responsible for our bad economy. There is no question that when you are a single parent, unemployed, and living on food stamps that you should not be considering adding to your family. Whether you already have just 1 child or even 6 children at home, everyone agrees it is not fair to the children you already have to put such a burden on them with the financial devastation multiple births can cause. Ms. Suleman has already been tried and convicted by the media, who has created this negative frenzy to make money for themselves. They have even given her a name that sounds like a comic book villain, “Octo Mom”. There has been many other multiple births and the parents have been given help by companies and individuals alike. The public has rallied around them and wished them well, but not with this Mom. Instead she has received death threats and all offers of help have been withdrawn. If she asks for help she is accused of being materialistic and using her babies for personal gain, if she says she can handle it by herself she is accused of being unrealistic. Now some people are suggesting that social services step in and take her children away from her and place them in new homes with new parents. This is wrong, and no matter what we think of how they got here, these kids are here now, and they need help. They don’t need the media maligning their Mother and driving her to do something desperate, because she has been pushed out on an emotional and hormonal ledge. Lets not treat her any different than we would the parents of other multiples just because she is poor, single, and showed poor judgement. We should offer help and give her and her family a chance to thrive before making threats. Nadya Suleman may not be a hero, but she is also not the villain.