Be A Good Boy And Take Your Medicine…

I hate having to give him his medicine when he is sick. I don’t care that it tastes bad, he has no right to spit it at me. I have to hold him down so he doesn’t run away and  if I am not careful he will bite me. My husband is no help at all, he insists I be the one to do it because in his words” I’m so much better at it”. Bull, ’73 just doesn’t want him to be mad at him for days. When I gave it to him today he yelled at me. He said “NO, STOP IT” and then spewed it all over me and him both. What’s a mom supposed to do, I have to wrap him up in a towel so he doesn’t flay around and hurt himself as it is. He is so smart and we have always tried to watch our language around him, but he just called me a bad name, I can’t believe he said that. Now he is mad and wants nothing to do with me, if looks could kill I would be dead and nailed to the wall. Here is a picture of the little brat sulking. He is so stubborn. 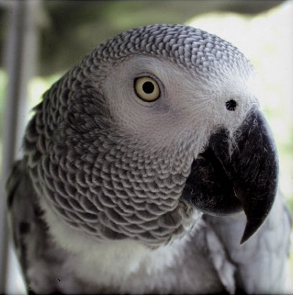 This is Ozzy and he is not sick now. He is our 6 year old African Grey parrot and his intelligence amazes me. He has a vocabulary of at least 200 words or phrases that he uses. This incident was the day I realized he was using his words to say what he felt, not just mimicking us. He wanted me to stop and he told me so. I was so shocked by what he said that I did. He is a great mimic though, he can make a knocking sound that will cause you to get up and answer your door. He does phone rings and microwaves as well as voices. He likes to say things in the different voices of the family. He enjoys fooling you. He also thinks he is boss of all the other animals. He yells at the dogs if they are barking and the cockatoo’s if they get noisy, by name to “stop that” or “be quiet”or “knock it off you guys” and so on. He is not affectionate like the Too’s, in fact he is a bit of a curmudgeon. Ozzy likes hanging upside down like a bat and chewing on his linky links, he prefers pink ones. He also has a nervous habit of plucking his feathers which makes me feel like a bad mom and him look like that naked Jay bird we are always comparing our kids to, but I love him anyway, even if he spits his medicine at me and calls me a crappy Robin.

11 Responses to Be A Good Boy And Take Your Medicine…