Am I Crazy Or What: Waiting for Harry Potter….

7/14/09 : I must be because I am sitting in line for Harry Potter….. the 12:05 am showing. I have my chair, my water and my kindle George. K and I are here for the duration and we can’t wait. I am also posting this from my phone, how cool is that. Expecto Patronum and beware the muggles. More to follow….. 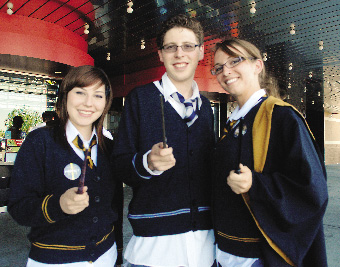 30 minutes until the movie starts and the crowd is so excited. The room is buzzing with energy and expectation. I think this energy might be the fountain of youth even though it is short lived because I feel like a kid. We are all chanting Harry Harry Harry! Gotta go more later….

Update 7/15/09 : Well it was an exciting night and the movie was great. There were a few surprises in the film and many story arc’s were left out as usual because of time but overall a good interpretation of the book. I have one more issue though and that’s those guys, you know the ones, the ball buster’s. Why must they pop the beach balls, it’s hard to imagine someone being seriously hurt by an inflatable beach ball, but since rules are rules why not confiscate them and return them at the end of the evening instead. It is very hostile to stand there in front of 150 people and pop the ball they were playing with. Some how it goes beyond being a spoilsport and touches on rage. Other that that it was a great time for K and I as well as ’88 and my husband, can’t wait until the next one.

10 Responses to Am I Crazy Or What: Waiting for Harry Potter….