No that is not a typo. I was looking to see how people got here, what kind of searches they did that led them here and I found “save the boops” It was too funny to keep to myself. Is there a national funding program to save these wild boops. Of course I am assuming they are wild because I don’t think you can domesticate a boop, can you? I managed to find this rare photo of one. 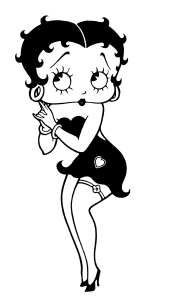 Well enough kidding around. It is October and that means it is Breast Cancer awareness month. I know this is something women try to avoid……but you can’t. I can not stress enough the importance of self-examination and mammograms in early detection and that is the key to survival. Set the example for your daughters. Teach them as they grow up that this is something all women must do for good health.

I was watching TV one night. I don’t remember what but I do remember it was on a Friday evening. I felt an itch on my chest just underneath my bra. As I was home alone I had no problem scratching it. And there it was……a lump the size of a pea. Time literally stopped. I’m not even sure I kept breathing. For those few moments I was so stunned I couldn’t move. But it was there no matter how many times I touched it, it didn’t go away, I didn’t imagine it. The world started turning again. I took a deep shuddering breath and I cried. I couldn’t help it. The tears just flowed. I knew I needed to see the doctor but the offices were closed until Monday. This would be one of the longest weekends of my life. Monday came and what I had felt was so urgent was treated like no big deal. Their first available appointment was in a 2 weeks. Two weeks! no way, I am not waiting 2 weeks to find out if I have cancer. Well after much bickering, whining, pleading, they agreed to see me that Friday. By the time Friday rolled around I felt like I hadn’t slept and thought I was getting an ulcer from the stress. The doctor examined me and agreed……it was a lump! She also managed to insult me by complaining about it being hard to feel (it was only the size of a boulder) because my breast are large and fibrous. I didn’t ask for a boob critique. WTF. She referred me for a fine needle biopsy. This is where they remove some fluid from the lump with a needle to test it to see if it is cancerous. I had to wait another long and grueling week for the test.

Fast forward 1 week: I was sitting in the exam room waiting for the test feeling terrified and barely keeping it together. I was alone because they wouldn’t let my husband wait with me. I heard the doctor outside the door yelling at the nurses. There was something about my appointment he didn’t like. It seemed as though he thought it was beneath him and should have been given to a less important doctor. Did I mention this was Kaiser? He entered the room and told me to lay down and asked me to point out the lump. When I did he stuck a needle in it and then removed it very quickly and started swearing. I kept asking him what was wrong but he ignored me and threw away the needle, then left the room. The nurse came in and said it was a cyst because the lump had collapsed when the needle penetrated it. There would be no test because he, “THE DOCTOR” had said it wasn’t necessary. I panicked. I needed the test. I had to know. So they did a mammogram and found some calcification in the area of the lump. I was told this might indicate cancer but that “we” would watch it and see how it was in 6 months. “No” I said “that won’t do” I started up the chain of hospital command and so did my husband. Phone call after phone call. I was scared but now I was also angry. I ended up having a stereo-tactic biopsy later that week. It is less invasive and leaves only a tiny scar. The technicians doing the test were great. They made me laugh and seemed to genuinely care about me. They also worked really hard to get the test right and make it work, the lump was up by the chest wall and it is hard to reach in this procedure. They were my angels. Just a side note here. After the test you have an incision so they put a bag of ice in your bra to help with the swelling. You leave the office with 1 humongous boob and one regular size one and boy let me tell you heads will whip around to stare. I thought some people might get whiplash from the double takes. For the first time in my life I didn’t mind the stares. It was funny and I was just glad to be alive that day. I don’t have cancer but I do have a mammogram every year and I do self exams once a week. That was 17 years ago and I was 37. Today things are handled better. They understand what your feeling and your need to know right away. So don’t be afraid, just do it.

You may have noticed my pink background. I am not usually into pink but all this week I will be using pink backgrounds to remind you to get your mammogram and to “save the boops” :-D

11 Responses to Save The Boops….